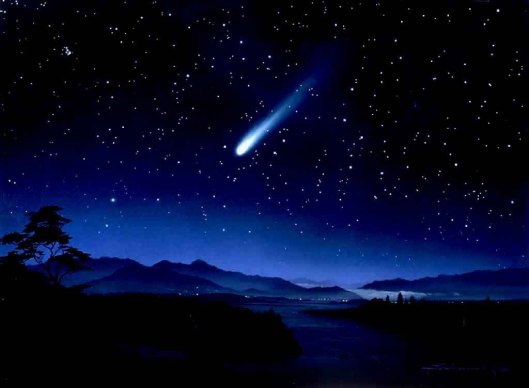 For the second night in a row, while walking our quirky hound on a crystal clear, crisp September night, I saw a shooting star.  Two nights in a row.  Shooting stars.  Isn’t that incredibly unlikely?  And I know that they were shooting stars and most definitely not planes.  Have you ever seen one?  One moment there’s nothing, and the next, a burst of light streaking the night sky. A split second later it is gone as quickly as it came, leaving me wondering, “Did I really just see what I think I saw?”  Yes, I did.  Twice.  Two nights in a row.

Perhaps it’s more likely to see these things because we live in a rural area.  The stars look so much closer and brighter than I remember them appearing to be when I was growing up in NJ.  There’s a lot less light pollution here.  And it’s a good thing we live in a sleepy town.  I spend so much of my nightly dog walks looking up at the sky that if we lived anywhere more congested, I would certainly walk into traffic or a building or something.  But then maybe if we lived someplace more urban, I wouldn’t be looking up because looking up would be useless with all of the light pollution.  Another reason I am thankful to live here. I just can’t get enough of the stars.

Shooting stars two nights in a row. What can that MEAN? (There I go, thinking that the universe is sending me some important message.  It’s a little egocentric on my part).  The first thought that came through my head when I saw the star tonight was an image of my two children.   Two stars – it must mean one for each of them.  And then the next thought was, “Make a wish.”

So I did.  I made wishes for each of my children.  I wished that they would grow up happy and healthy.  I wished that they would each find that special something to pursue that they are good at, and that makes them feel whole. I wished that their respective journeys in this life would not be too hard, but maybe just hard enough that they learn what they need to in order to be the best people they can be:  bright, yet humble; peaceful, yet driven; and most importantly, full-full-full of love and equipped with the skills to bravely and honestly show that love to others.

I hope the fact that I am saying my wishes “out loud” doesn’t jinx the wish magic.  And I hope it isn’t too tall an order for two shooting stars.  Star light, star bright…

You may also like my other blog, Cadigan Creative, where I share stories about how people are using creativity, kindness and compassion to make the world a better place.