I was the kid who always threw up in the car. I’ve always been a bit prone to drama; a girl who experiences life in the extremes, so it makes sense I would have to spice up boring rides on the Garden State Parkway. We would drive an hour-and-a-half to visit my grandparents in South Jersey, where my grandmother would allow us to eat way too many desserts (Mania! Excitement! …much to my mother’s chagrin), and I would spend the hour-and-a-half voyage home vomiting (Pits of despair …much to everyone’s chagrin). Aaah, sweet memories of youth.

My poor siblings. As I heaved the day’s sweets from my body (now putridly sour), my sisters and brother would heave their bodies to the “backity-back” of our green Impala station wagon, hoping to avoid impact. But no one could avoid the smell. If the sick had to happen at all, we all hoped Dad would pull over in time, or that at least we would be in the 130’s on the Garden State Parkway, closer to home than not. I learned to breathe deeply in a fervent prayer to ward off the sick, block out the motion of the car, and imagine myself safe and cozy in my bed, finally able to put the harrowing ride behind me. It’s no wonder the novelty of the journey was lost on me at a young age, but it did make for a fabulous adventure story, rife with suspense, “Will they make it home before impact? Will she be able to overcome the nausea and save the car from eminent disaster? Stay tuned…”

As the years have gone by, I have learned to cope, mostly by sleeping in the car. I once slept through an entire fourteen-hour drive from Indianapolis to New Jersey. I suppose sleeping beats the alternative, but the truth is, sleeping through the journey doesn’t seem to be an ideal way to travel, either. Sleeping numbs you to the negatives, but you also miss the good parts: good music on the stereo, scenery, conversation, or quiet time with one’s thoughts. I don’t want to sleep through the twists and turns, the picturesque rolling hills, or the traffic jams. I don’t want to be locked in a metal box, stuck in traffic with fighting children, either, but I am trying to be more present for both the good and bad parts. I keep reminding myself that simple interactions with life’s traveling companions are not something to “get over with.” I try to remember I don’t always need to be chasing something bigger or better – anxiously looking toward a destination. Sometimes it’s OK to just quietly enjoy the ride.

Remember when folks talked about “Sunday drives” as recreation? The “good old days,” when people actually sat in the car for no other reason than to drive through the countryside? The destination didn’t matter – moving through space and admiring the day mattered. When did that cease to be? No one wants to just be in the car anymore – we complain about how long it takes to get places, about traffic. We constantly ask, “What’s next?” rather than just being where we are, noticing what’s now. 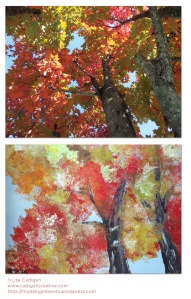 my attempt at capturing fall in a photograph and a painting

So my goal, in life as well as in the car, is to breathe in traffic jams; to sit comfortably and still during long, flat stretches, using these times as an excuse to turn the music up and sing out loud, or to reflect, or to dream. Every now and then, I stop and just scan my senses: What am I seeing? Hearing? Smelling? Feeling? No analysis, just noticing. These are the times I remember you can smell fall; the times when the oranges and reds of the trees I pass by are just so impossibly beautiful, I might burst. Anything can have an aspect of wonder if you take the time to notice it. There is an impulse to try to capture it – with words, in a photo or a painting. But really, that’s another way of denying a life of presence, too. Sometimes I get just as anxious about the fall turning to winter too quickly as I do about the approach of nausea and angst. I have to remind myself for the umpteenth time that everything is fleetingly temporary; which offers both relief and a little melancholy, depending on the situation.

Are we there yet? We’re never there. And that’s OK. The time between here and there will pass whether we allow ourselves to worry and fret about it or not. We can find peace in the knowledge that we are always right here, right now; right where we are supposed to be.

You may also like my other blog, Cadigan Creative, where I share stories about how people are using creativity, kindness and compassion to make the world a better place.